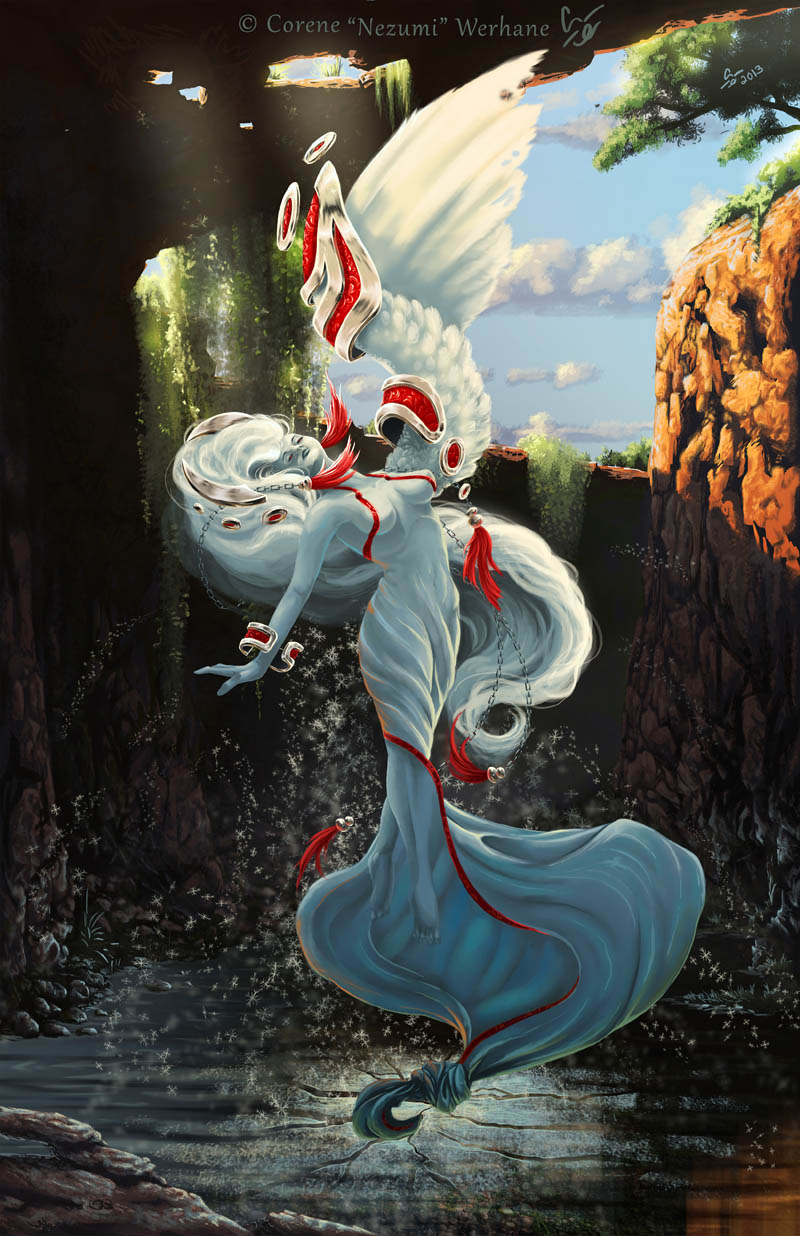 Angel of the Oasis

The people of the plateau tell a story about the old days when they were nomads. Once, the plateau was nothing more than a landmark on their yearly journey; a place of stability in an ocean of shifting sands. The land was high enough to raise their ancestors above the swirling dust and heat so that the gods of the sky could look down upon them. The Lord of the Sky smiled on the nomads and brought rain to the plateau at night.

One of the children of the sky loved the earthbound men. She was a creature fickle and shifting as the high, cold winds that gave her birth. Many seasons saw the men of the nomads tormented by love after her brief flirtations. The Lord of the Sky watched several of the smitten leap from the edge of the plateau as they strove to join his daughter in the wind. He called his child to him and demanded that she leave the nomads to their travels. But no matter how often she agreed, her nature would not allow her to adhere to her word for more than a season.

The Lord of the Sky stopped sending rain to force the nomads to seek another path through the sands that they might avoid his daughter’s flighty gaze. Many of the weaker people died from thirst in that season of travel, but they returned the following year with more water stored on their pack animals. The men still came to the plateau. The men still died chasing love.

Finally, the Lord of the Sky found a beautiful young man and placed a curse on him that would keep all of the children of the sky from being able to come close. The daughter tore into a frenzy when she could not approach. Every time the nomads tried to leave the plateau, they were blinded by the sandstorm created by her savage attempts to reach her newest love. The nomads could not survive long on the plateau without the rains. Every night they sent their men to the cliff’s edge until they discovered which man held the daughter’s fickle heart. The young man hugged his family and gave his possessions to his siblings. Then the nomads left without him.

The following season, the nomads returned to the plateau and found a shallow circle carved into the surface of the stone. In the center they found the bones of the man who had stayed behind. A shrine was built to his sacrifice.

Every year the circle deepened and widened as the daughter continued to circle her elusive love. The chill of her passage froze the water in the air and the melting ice collected in shadowy recesses. Eventually the chasm held enough water out of the sun’s reach that the nomads no longer had to travel the seasons. Four tribes settled on the island of stone in the middle of the dune sea. These became the People of the Plateau. All four tribes leave offerings to the shrine of the young man to thank him for the sacrifice that made life possible in the desert.