We are officially home and covered in cats! This is the first chance I’ve gotten to sit down and write without a feline head aggressively smashing into my hands.

What a busy weekend! GenCon was amazing. Barbara and her staff run a fabulous show. I had a great time talking to my table neighbors Jin (J.S. Choi) and Joe Slucher. I also got to make faces at Omar Rayyan, but there was such a large chasm of open space between our rows that the effect was somewhat less that usual ^_~

I think one of the highlights of the whole trip was watching Brian run up and down the interactive light installation at the Indianapolis airport. He managed to set off the disco event and started “dancing” on the people movers while multicolor lights strobe. I’m so upset I didn’t get my camera out in time to film that ^_~ If only it had been “Play That Funky Music” it would have been the perfect Brian moment. 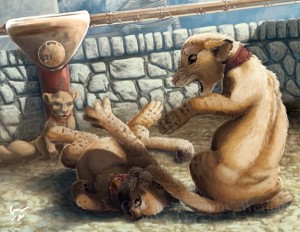 Warcats in Training
I got to see Warcats-in-Training in print for the first time, which was super exciting. It’s one of the last card illustrations I did for L5R and I thought it was lost in limbo with some other pieces when the game was sold to Fantasy Flight. I have no idea when or if the other art will surface since FF just has 2017 as the publishing schedule for the game. But I got to meet some great L5R fans, sign some cards, and nerd out about Ratlings. I missed seeing Prof this year, though 🙁

This year I managed to behave slightly less like wallpaper at the artist get togethers! (Though, Drew still had to physically stop me from retreating from at least one conversation..) My friend Nate The Great came with me one night and entertained the crowd with his ridiculous balloon skills. We had a lot of fun ^_^ even though I am prematurely an old lady and had to turn in earlier than I would have liked.

Sales were down quite a bit from last year, but that was also true of the other two 2016 shows I’ve done so far. I’ve been doing more local work and haven’t put in as much time doing self-promotion as I should. My GenCon new years’ resolution is to get back into posting these blogs and updating my social media.

But for now, it’s time to art!